The first of a series of three ASD TUGs 2810 Hybrid was navigated into the Den Helder harbour by the Royal Netherlands Navy (RNLN) on Saturday, February 20th. This hybrid tug that bears the name Noordzee is almost 29 meters long and is the first standard hybrid tug supplied by Damen that the RNLN will employ. 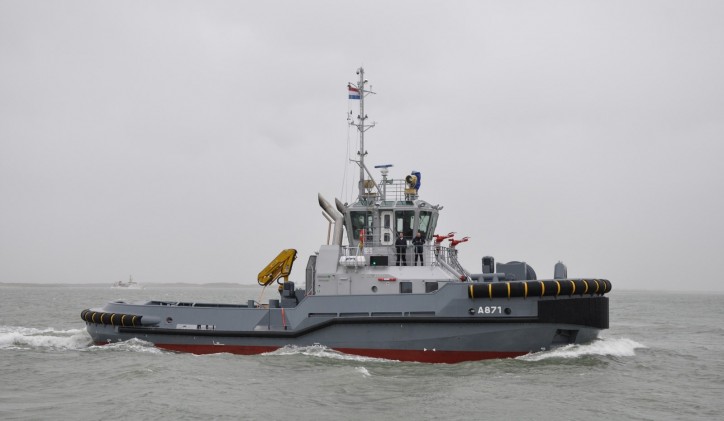 The contract for the three ASD tugs emphasises the good cooperative partnership that exists between Damen and the RNLN, as well as their shared vision. Both parties believe in a durable future and have chosen a sustainable option with the ASD TUG 2810 Hybrid.

At this time, the RNLN has four conventional tugs in Den Helder at its disposal. However, these older vessels do not have sufficient power to tug new ships such as the HNLMS Karel Doorman, HNLMS Rotterdam and theHNLMS Johan de Witt. Furthermore, the old vessels still make use of normal propellers with rudders with a restricted manoeuvrability and no longer fit the vision of sustainability that the RNLN has for the future. 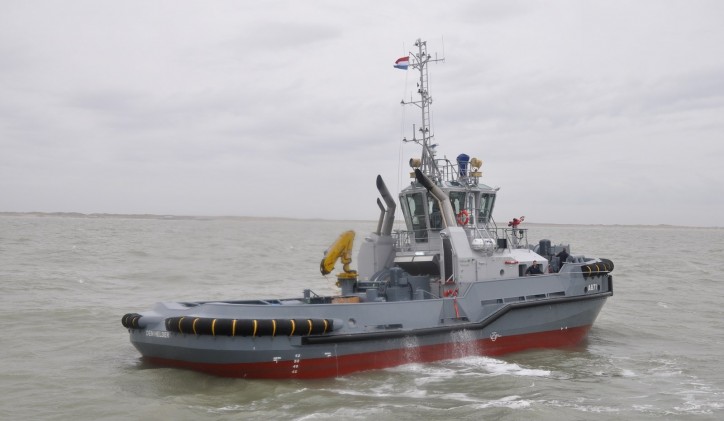 The state-of-the-art ASD TUG 2810 Hybrid is one of Damen’s standard tugs and, with its hybrid propulsion system, is powerful and durable. The vessel is provided with two rudder propeller units for optimum manoeuvrability and is able to sail on full electric power by means of a set of batteries and also diesel-electric on the generator set. When full pull is required, both main diesel engines are used, giving a maximum bollard pull of 60 tonnes, ensuring that all heavy duty tug jobs can be realised.

Hybrid as a standard

The RNLN was explicitly looking for a standard tug which was very environmentally friendly, as well as being powerful enough to realise heavy operations. The Navy contracted Damen for the project due to the fact that hybrids and sustainability are standard design concepts for Damen. In total, the RNLN, in cooperation with the Swedish Navy, has ordered five vessels, including the hybrid tugs. The two additional Swedish tugs are also of a standard design, but designed for operations in icy waters.

The Noordzee was sailed by the RNLN from Damen Shipyards Galati in Romania to the port of Den Helder. The two other ships, the Waddenzee and the Zuiderzee will be delivered in mid-March and mid-June. Damen is proud to have the opportunity to cooperate with the RNLN, in a partnership which emphasises the vision of sustainability and the diversity of both parties.